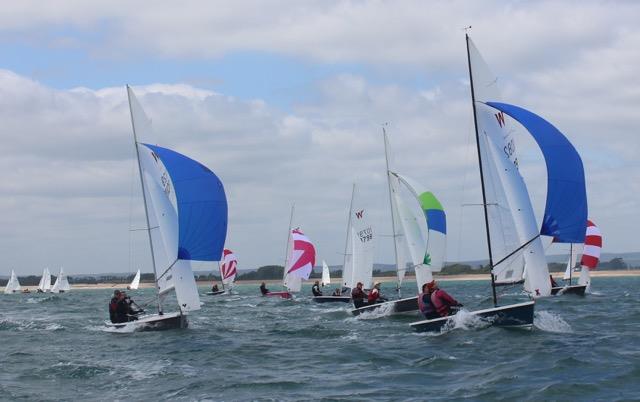 It’s all stations go for the Wayfarer National and European Championships 2022 which start at Arun YC on Thursday 18th August and run through to Sunday 21st August with three races scheduled each day.

The European Championships were postponed last year because of travel restrictions imposed by the Covid pandemic, but the host club are delighted to welcome visitors from Denmark and Ireland to join the mainland UK fleet. The Danish Wayfarer fleet is particularly strong at the moment and two of the travelling entries for this Championship were in the top ten at the recent Danish National Championships and they would expect to do well.

Other teams expected to be near the front of the fleet would include Quentin Strauss (previously a runner up in the International Championships and seventh at the Internationals in Florida earlier this year) and Sarah Burgess who have borrowed Michael’s other Wayfarer, W10648; Guy Marks (UK Wayfarer National Champion 2015, and recently seen at the front of a Snipe) and Mel Titmus in W11120; Bill Whitney and John Shelton (perenially at or near the front of the fleet, third at the recent Southern Championships and fourth at the windy International Championships in 2019) in W10688; and John Clementson (multiple champion in Mirrors and Graduates) and Sam Pygall in W11101 who recently finished second overall and first Wayfarer at the Medway Marathon. Watch out also for former national champions and Wayfarer builders Richard and Mark Hartley (W11323) who like it windy!

Wildcards who might be expected to have at least one very good result during the championships would include John Goudie and Sam Boniface in W11118 (who have been showing excellent speed this year especially in windspeeds of 7-10 knots and who were runners up at the Southern Championships last month), Richard Stone and Catherine Gore in W10974 (who haven’t travelled much this year but are always excellent in the light stuff) and Mark and Alex Lee (W11211) who like nothing better than muscling their boat around the race course in stronger winds and will do well in those conditions if they can stay off the righting lever.

Dark horses will the boats from Parkstone especially Jackie Dobson and Dave Mitchell who have a long and successful history in the class and Sean and Helen Murray who showed enormous potential on the second day at the Nationals in 2021 although they had struggled a bit in the extreme conditions on the first day.

Looking through the entries it is difficult to identify any rabbits so watch out for everybody else… especially if you are on port!

Arun YC hosted a very successful UK National Championships in 2017 (with very memorable socials) so the class is very excited about returning there in 2022. The organising committee led by David Robinson have put in a huge amount of work to arrange a great event on and off the water. The extreme heat of recent days may be a thing of the past but the forecast is for a range of wind conditions over the event with something for everybody.

The Championship is one of the Craftinsure National Circuit and Travellers Series events for 2022 and is being sponsored by Craftinsure, McNamara Sails and Hartley Boats. 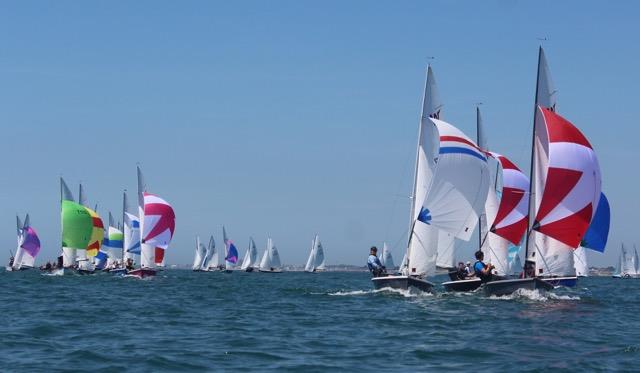 After a two year hiatus due in part to the fallout from Covid, we are inviting you to come and help celebrate our 10th anniversary over the weekend of 3rd and 4th September.

We are in full swing to once again encourage racing classics to strut their stuff in Chichester Harbour.

The format remains much the same as previous years with a series of five races over the weekend, club suppers on Friday and Saturday evenings, breakfast on Saturday and Sunday mornings. David (Dougal) Henshall is again due to judge our Concours d’Elegance.

Full details of the event, including the Notice of Race (also attached), are available via the Classic Boat Revival website.

All payments for entry, catering etc will be made via a dedicated booking page within Bosham SC’s website.

We hope that several classics will follow on to us from the Uffa 50 Festival in Cowes 18-21st August. We would encourage those of you with Uffa Fox dinghies to continue your celebrations with us in Bosham. For those of you active in club and class associations, please feel free to forward our emails and links to encourage others to participate.

Some of you will remember a video was made on the 2012 event, originally published by an online sailing channel. Sadly they ceased business but a copy of the video has been found and published on YouTube. If you fancy a trip down memory lane you can see it here.

Events like ours are enhanced by the help & support of sponsors.

We are very grateful to have the support of local estate against & auctioneers Stride & Son, and the legal firm Verisona Law  and for the 10th year in a row, Pusser’s Rum, which no CBR prize giving should be without!

Please excuse the paucity of emails in previous months, probably no bad thing, but the real world has been getting in the way, I’ll make up for it in the coming days with further news & updates.

Yachts and Yachting have published a report of the Southern Championships at Shoreham the weekend before last. Link below. 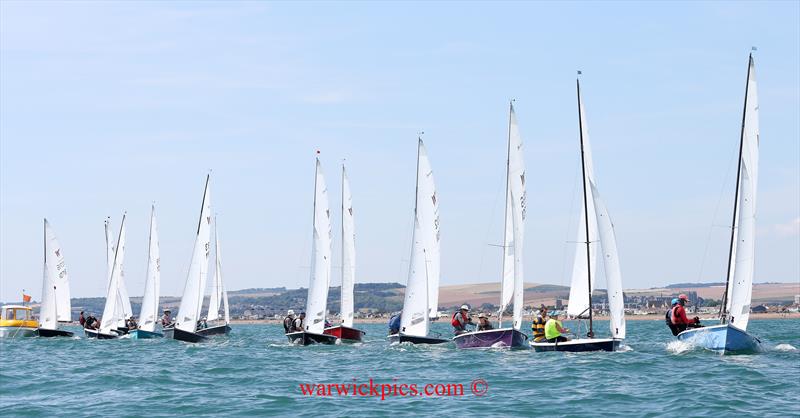 The Wayfarer fleet had a chance to warm up for their National Championship in August when they visited Shoreham Sailing Club over the weekend of 16/17 July for their Southern Area Championships and Craftinsure National Circuit event.

A fleet of 13 boats competed over the weekend. The fleet included the first appearance on the circuit this season of Bill Whitney and John Shelton from the host club. Shoreham SC also provided a couple of ringers in borrowed boats because local talents Peter Snowdon and Louise Carr borrowed 11046 and young tyro Calum Tait sailed 10690 with the experienced Philip Ayton as his crew.

This event was also an opportunity for Michael McNamara and Simon Townsend to debut their new boat. We are obviously going to have to look out for a black boat at the front of the fleet in future rather than the famous aqua green coloured hull.

Racing took place over two days of hot sunshine. The wind, in truth, did not reach the forecast strength and racing took place on Saturday in a south easterly peaking at about 10 knots but fading as the afternoon went on. The third and final race of the day was sailed in much lighter conditions which meant the race was a bit of a struggle for all.

Sunday’s racing was held in similar conditions. Again, the wind did not rise much above 10 knots and was mostly lighter than that. 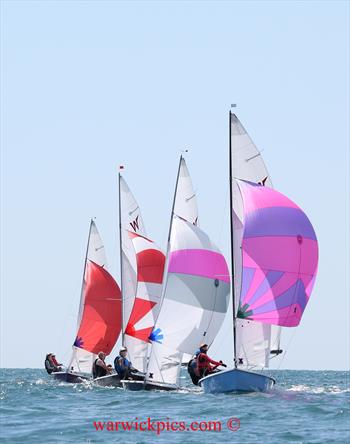 There were encouraging performances from several teams over the weekend. Bill and John placed second in the first and third races to finish third overall just in front of Andrew and Martin Wilson. Just behind the Wilsons were Calum and Philip who, after a mediocre Saturday, enjoyed some excellent results on the Sunday. In taking second place overall, John Goudie and Sam Boniface continued their good form from the Inland Championships at Datchet a couple of months ago, winning the second race and being well placed at various times in most of the other races over the weekend. 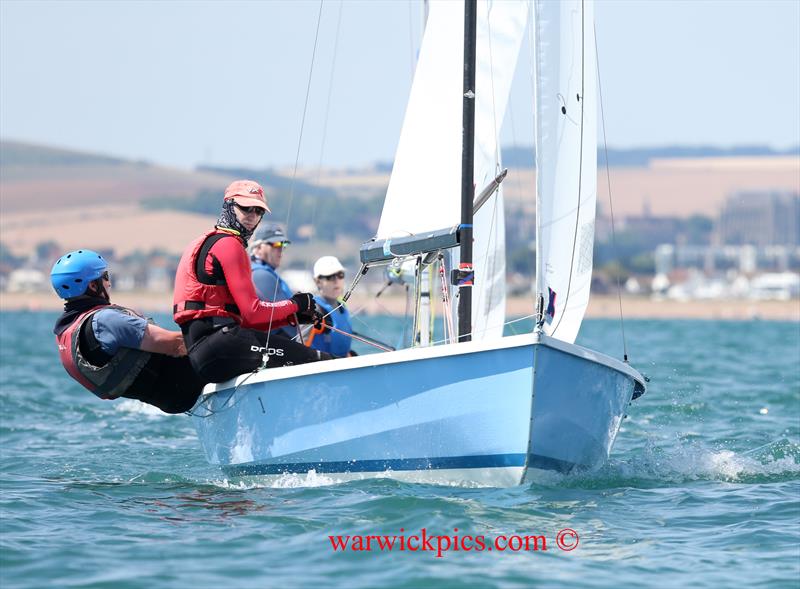 The winners were Michael McNamara and Simon Townsend who seemed to get faster as the weekend went on as they adjusted to their new boat. They won five of the six races sailed but did not have it all their own way. They won the first race only in the last few yards of the final beat to the finish line. They were well beaten in the second race by the corner banging John and Sam. In all of the other races, however, Michael and Simon were pretty much in control and seemed to master the difficult conditions with aplomb.

William Warren and his team managed the racing efficiently and even brought out the black flag after just the one general recall (mistaking us for Merlins, no doubt) but that seemed to do the trick. No more misdemeanours. A big thank you to everybody at Shoreham SC for making the Wayfarers so welcome and we look forward to seeing you all again next year.

As we approach just a week before the Championships begin , the Early Bird reduced entry fee of £85 expired  last Thursday, and is now £100.

Entering now, will greatly assist with our planning of the event to know how many we need to cater for!

The final week before a major championship is always manic so, if you intend to take part, can I please implore you to get your entry in as soon as possible.

We are looking forward to hosting this event and will do all we can to make it a great success.

We have received some feedback that some of you were hoping that we could provide some form of camping on site.  Initially we thought that was unlikely but, we have now reassessed the situation and are able to offer a limited number of spaces for small – 2-person max tents in our dinghy pen.

We are also able to accommodate some spaces for camper vans in the car park.

Both will be allocated on a first-come, first- served basis.

We will also be offering a ferry service across the river at specified times so that those of you staying in B & Bs in the town will be able to leave your car in the town, without having to worry about drink-driving.  The times of the ferry will be published to fit around the times of events and bar closing!!

I hope these added facilities will encourage any of you who may have been hesitant about entering to fill in your entry forms and submit them to me quickly!!! 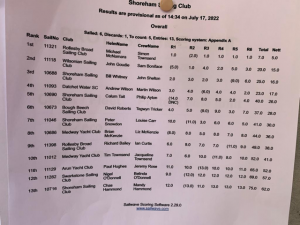 The combined National and European Championships are now just six weeks away and the closing date for the discounted early bird entry fee expires on 4th August.

Please, if you are planning to enter, we’d like to encourage you to get your completed entry form to David Robinson at Arun YC, as soon as possible.  That will also enable the club to be better prepared and avoid any last minute panics!!!

In addition to hoping to receive your entry, it would be appreciated if you could please forward this message to any Wayfarer members in your club who you think might be interested in joining us.  Entry forms and NoR can be found here: 2022 Nationals and Europeans – UK Wayfarer Association

Needless to say, if you have any queries, or require and further information, please do not hesitate to contact David Robinson (for Arun Yacht Club)

Shoreham Sailing Club are delighted to welcome the D-Zero and Wayfarer fleets to compete at their Southern Championships on 16 – 17 July 2022.

Come and experience the best sea sailing in the UK, with easy sheltered launching in the harbour and a short sail out to sea, Shoreham is renowned for its wonderful clear waters, fantastic waves and regular sea breeze.

All information about the event including online booking can be found on the Shoreham Sailing Club Website which includes the most up to date NoR, SI’s, Harbour regulations and how to enter online.

Currently there 9 Parkstone Wayfarers entered and it will be a great opportunity for visitors to sail in the beautiful surroundings of Poole Harbour and show us locals how to do it! 🙂

If we can get 12 entries we will be given our own start which we managed to achieve just from PYC entries last year so fingers crossed we will also get there this year!

For further info before the event please contact Trevor Card

and Wayfarer deputy Ian Sargeant for any help, during the event.