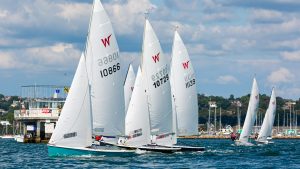 After the frustrations of 2020 when only a scaled back race week could be held, the Parkstone Wayfarers were particularly excited about the return of a proper Poole Week this year. It was much anticipated and most had booked our places well in advance. So, eager to get started, we began a day early! After club racing on Saturday afternoon, we all headed to Sean and Helen’s for a barbeque and chatted happily about the racing that lay ahead of us!

On Sunday morning 13 talented and adventurous teams arrived at Parkstone Yacht Club to register. As we rigged our boats the sun was shining and with a gentle 8-10 kts of breeze, the harbour beckoned. Jackie Dobson and Dave Mitchell in Captain Jack ran away with the first race. For the second race the wind became more shifty and with a last-minute change of course there was some confusion. One crew mentioning afterwards that the rest of the fleet had sailed the wrong course, only to realise that they had in fact sailed the wrong one and so had to retire! Back on dry land we discussed the day’s events over a long cold drink before enjoying a PYC complimentary curry night.

On Monday the Wayfarers sailed one long race down to South Deep. It proved to be a challenging course in strong tides, especially on the return beat past Brownsea Castle, where the decision had to be made whether to stay close to the island or head across towards Sandbanks. Opinions were divided and much discussion followed as we enjoyed homemade cakes on the balcony after racing.

Tuesday brought a different kind of challenge with the wind fluctuating unpredictably between 10 and 20kts. Several boats, including Captain Jack were over eager on the start line and had to re-start at the back of the fleet. Working hard to catch up, Jackie and Dave went on to finish first in both the day’s races. It was the Wayfarers turn to be treated to feedback from top sailing coach, Niall Myant-Best, organised by Parkstone Yacht Club. Niall’s enthusiasm for sailing is infectious and it was great to hear, from an expert, what fantastic crews we all have!

Wednesday was another day of light winds, with many of us being lucky enough to catch a glimpse of a seal sunbathing on Stony Island, followed by close encounters with a pair of dolphins at Ellis Jones race mark. We returned to enjoy tea and cake straight after racing in true PYC Wayfarer style! 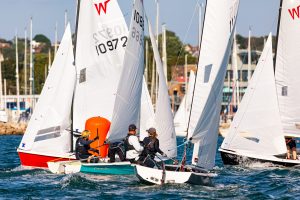 For Thursday’s racing we requested a long harbour tour around the islands. We sailed anticlockwise, taking in the scenery behind Brownsea, Furzey and Green Islands and still had time for a shorter second race before heading back to the club. After an extra-long shower and spruce up in our lovely new changing rooms, we were ready to enjoy our class dinner! The evening event was well attended by the racing teams along with partners and a few of our old Wayfarer friends too! Later, we retired to the balcony to watch the fireworks over Poole Harbour.

Friday was another 2-race day to finish the week. Throughout the week there had been many changes of position, except for Jackie and Dave who, again, led us all home in both of Friday’s races. They won 8 of the 11 races earning them their first Poole Week win! Having competed in over 30 Poole Weeks, Jackie’s name will now be engraved on the same trophy which was won twice in the 1980s by her late father, Basil Hodder, one of the founders of the Wayfarer fleet at Parkstone Yacht Club. After prize giving and barbeque we filled the dance floor, partying until late into the evening with music from our very own Wayfarer sailor, Steve Haley, and his band “Running Wylde” What an amazing week it has been.

Thank you, Parkstone Yacht Club for a wonderful week of sailing and socialising. It really was a fantastic event. The Parkstone Wayfarers are already looking forward to next year and hope to welcome new friends to share the thrill of racing in our beautiful harbour. Please do come and join us!