Following a competitive start to the 2022 Wayfarer National Circuit at Datchet a couple of weekends ago, the Wayfarer fleet moved on to West Oxfordshire Sailing Club over the weekend of the 23-24th May for the prospect of some testing restricted inland water sailing.

As well as the Western Area Championships, this would be the second event in the Craftinsure National Circuit and Travellers Series 2022 supported by Craftinsure, McNamara Sails and Hartley Boats.

For the fleet, this was the first time back at West Oxfordshire since 2019 when Wayfarer legend Brian Lamb was victorious over two days of contrasting conditions (windy and light). As usual the club provided a very warm welcome to visitors from as far afield as Derbyshire and Norfolk. The seven visitors were joined by four home boats to create an 11 strong field, while sharing the event with a Wanderer fleet.

Following on from Datchet, many of the main protagonists had journeyed to a beautiful part of the world in the Oxfordshire countryside. Michael McNamara and Simon Townsend made an appearance at West Oxfordshire for the first time in several years. Andrew Wilson was joined by semi-regular inland crew Sue Risbridger. Circuit stalwarts Nigel and Belinda O’Donnell had journeyed down from Derby and have demonstrated some fine form in tight, restrictive inland waters previously (usually the tight restrictive inland water waters at Swarkestone!). The “heroes of Datchet” John Goudie and Sam Boniface were looking to continue their form from that event and Mark Lee and Sam Pygall were in attendance, with Sam able to sail the entire weekend. The stage was set for competitive sailing.

Day 1 dawned. The wind was blowing from the East, with a hint of North, varying between F2 and F5 in the gusts. For those not familiar with West Oxfordshire Sailing Club, the wind direction meant short, gusty, super shifty beats of about 50 metres across the pond and a beam/broad reach down the length of the pond. Scary. The race officer set a creative course that had no gybes but plenty of opportunity for thrills and spill where boat handling had to be immaculate to avoid anything untoward.

Continuing the battle from Datchet, McNamara and Townsend and Wilson and Risbridger shot off a tight startline and were showing the rest of the fleet how to master the tricky conditions, with Lee and Pygall and Goudie and Boniface in hot pursuit. But then disaster struck Andrew and Sue as they were blown over by one of the more vicious gusts which gave Lee and Pygall an opportunity to sneak through. The first broad reach of the race gave crews the opportunity to stick or twist – twist and fly the spinnaker with the tantalising opportunity to gain boat lengths or stick with white sail sailing, which although slow, gave some hint of control. McNamara and Townsend provided a demonstration to the rest of the fleet of keeping 3 sails under control in the conditions, followed by Lee and Pygall and then Goudie and Boniface. Local team Day and Williams came through for a creditable fourth.

After a well-earned lunch, Race 2 followed a similar pattern. McNamara and Wilson pulled someway clear and were battling intensely as the front of the fleet for a few rounds, followed by Lee and Pygall and local team Day and Williams. Unluckily for Wilson and Risbridger, lightning struck twice and they were undone again by a bad gust and went for a second swim. This allowed McNamara to sail off into the distance, followed by the consistent Lee and Pygall who continued to explore the limits of their spinnaker work and Day and Williams.

Race 3 finalised the day and with Andrew and Sue taking some time out following their swims, McNamara completed a perfect score for the day with an inland water horizon job, demolishing the fleet despite the tricky and testing conditions. Lee and Pygall were a clear second, using the spinnaker as much as they dared, and McNamara club mates Richard Bailey and Ian Curtis completed the podium. The O’Donnells got their best result of day 1 with a creditable fourth, having held second briefly early in the race.

The fleet gathered for a fish and chip supper laid on by the host club and were grateful for the prospect of only two races on the Sunday and a forecast of some moderation of the wind, at least with respect to the strength of the gusts

Sunday arrived and the wind was broadly in the same direction but the gusts felt less severe. Races 4 and 5 for the weekend were held back-to-back. Lee and Pygall flew into an early lead in race 4 for the first few laps but were reeled in by Wilson and Risbridger and McNamara and Townsend who then proceed to have a great battle over a testing course which continued to present both wind shift and gust challenges. In the end, Wilson and Risbridger emerged triumphant to break McNamara’s run and take a well-deserved bullet. Lee and Pygall, continuing to sail consistently, made up the podium. Goudie and Boniface returned to the front of the fleet with a fourth.

Race 5 started with the final step of the podium to be decided. Similar to races 1 and 2, Wilson and McNamara flew off and again battled around the racecourse, this time with McNamara prevailing, picking up his 4th win in 5 races. The highest level of sailing in some of the trickiest inland waters on the circuit. Lee and Pygall – a new pairing sailing only their 3rd event – completed the podium in race 5.

Andrew and Sue’s second in the last race was just enough to pull through and take 3rd place in the event overall. Mark and Sam were rewarded for their spinnaker work on Day 1 and consistency on day 2 to take the runners-up prize. But, overall, no one could touch Michael and Simon in conditions where mental and physical stamina, wind anticipation and overall boat handling brought their rewards in terms of scores. Kudos as well to John Goudie and Sam Boniface who continued some of the good form from Datchet, local sailors Andrew Day and J-P Williams and Richard Bailey and Ian Curtis. Mention should be made also of youngsters Emily Batterton and Jasmine Speller who competed in a new MK IV club boat and completed 3 of the 5 races. 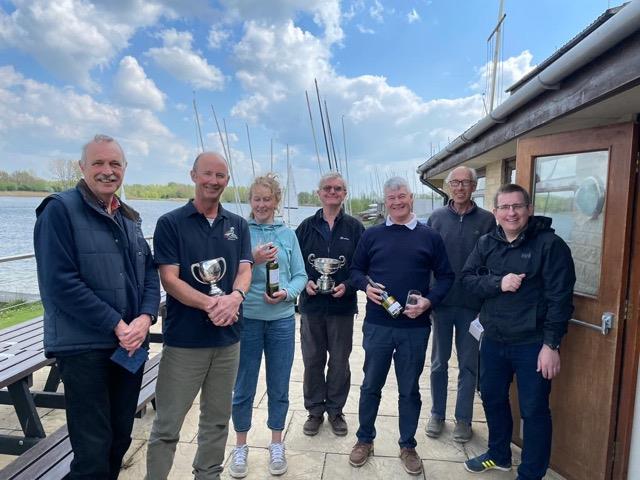 The next Wayfarer open meeting is Banbury SC over the Jubilee weekend in June. This event does not form part of the National Circuit but does provide an opportunity for a training day with Michael McNamara followed by a one-day regatta at a venue not visited by the Wayfarer fleet in recent times.