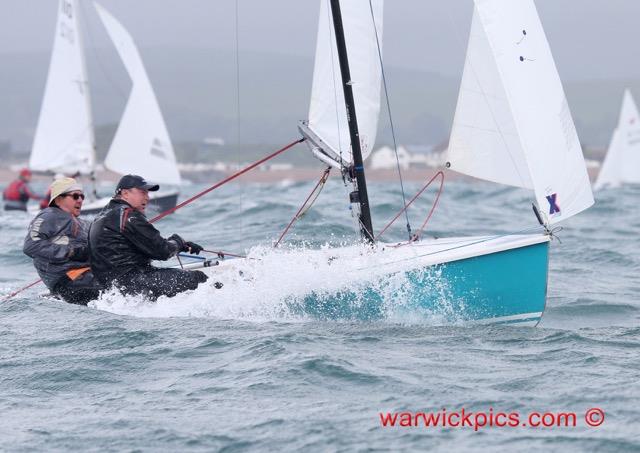 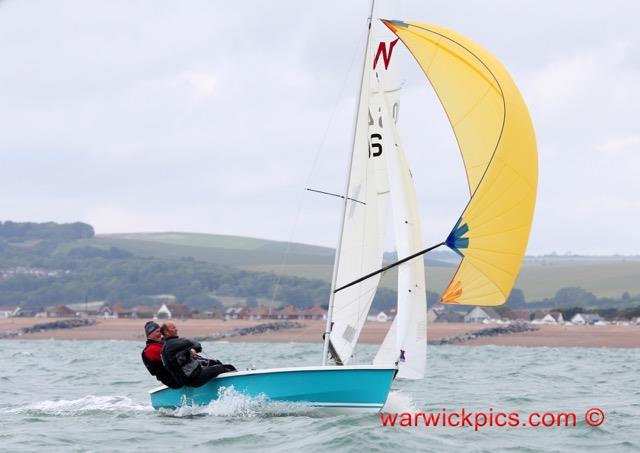 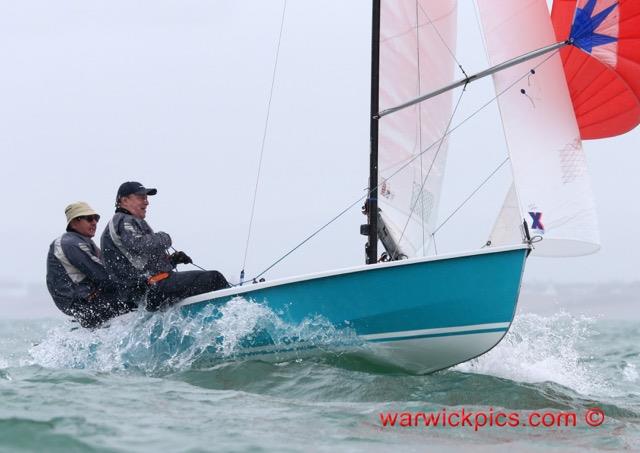 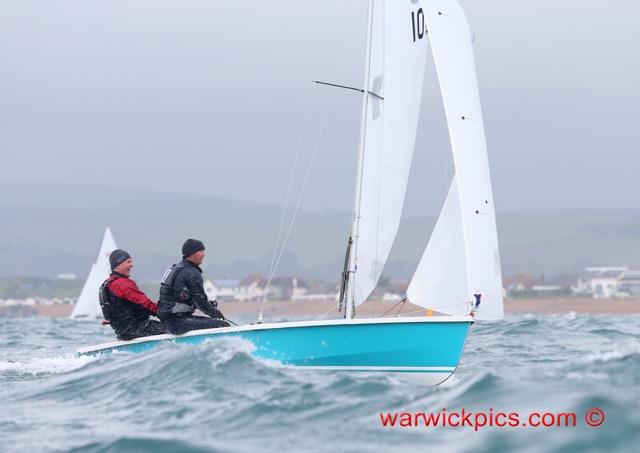 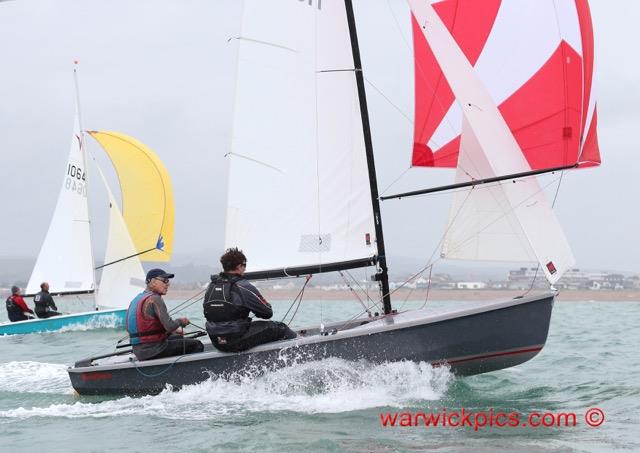 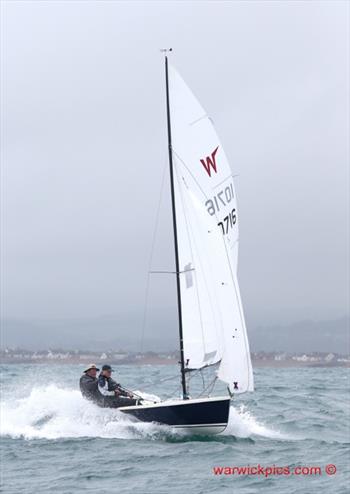 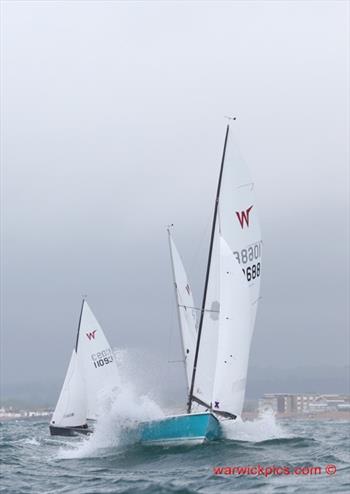 The sailing environment could not have been more different to the last event at Medway YC. There we had light winds and tricky tidal river conditions. At Shoreham the forecast promised force 4-5 winds on Saturday (with showers) and a little more wind on Sunday (with more rain). In spite of the less than awesome forecast the camper vans descended in West Sussex along with a couple of tents ready to take on the elements.

Sailing legend Alan Warren was the race officer who, with his team, put on good racing on both days. The committee boat appeared to be a singularly bouncy platform from which to run the racing so it was a tough task well done. The schedule was to have three races on Saturday and three on Sunday with one discard after the 5th race. The race course on both days was a triangle/sausage over four rounds.

The pattern was set during the first race on Saturday. Andrew and Tom Wilson from Datchet Water SC led at the first mark with Michael McNamara and Simon Townsend (Rollesby Broad SC) and Bill Whitney and John Shelton (Shoreham SC) following behind in close formation. The rest of the fleet rounded the mark a short but respectful distance further back. A tight three sail reach across the waves was followed by a gybe and a slightly broader reach with the waves to the leeward mark by which time McNamara/Townsend had gained a small lead they would not relinquish for the rest of the race. Meanwhile, over the 45-50 minute race, Whitney/Shelton ground down the Wilsons to take the runners up spot. Best of the rest were the McKenzies from Medway YC after a close battle with their clubmates, the Townsends.

The second race on Saturday saw the Townsends join the leading three boats for the first lap. Although the wind had not diminished the fleet as a whole was getting braver with most of the boats flying spinnakers on the second reach and run and several also flying the spinnaker on the first reach with varying degrees of success. As the race progressed, the front runners got away from the rest of the fleet again. This time McNamara/Townsend won from the Wilsons. Whitney/Shelton got the better of the Townsends who in turn beat the McKenzies and Brian Lamb and Sue Risbridger from Wilsonian SC.

The third race was sailed in a marginally softer breeze; but it was still hard work. In this race McNamara/Townsend led from the start and finished with a fairly comfortable lead. The Wilsons and Whitney/Shelton had a race long battle and traded places a few times. The Wilsons got the nod at the finish. A little further back, the Townsends again finished ahead of Lamb/Risbridger and the McKenzies.

The overnight standings saw the lead held by McNamara/Townsend followed by the Wilsons and Whitney/Shelton. However points were close and with three more races scheduled for Sunday things could change.

As we packed our boats away it started to rain heavily. Some tents were pitched. Other tents stayed in the car and hotels were found instead. All the competitors enjoyed a chilli at the club with the National 12 sailors who were sharing the open meeting.

Sunday morning dawned damp and uninviting. The wind had also increased a notch or maybe two, and there was quite a sea running with waves increasing as the tide turned. After a bit of umming and ahing (and sheltering from a rain squall under the club verandah) the Wayfarer fleet launched without exceptions. The Townsends were the first to return to the harbour to effect a repair to their forestay. There was no delay in the racing however so they started late and with their fourth place in the overall standings in jeopardy. They were in the perfect place, however, for a grandstand view (through the rain) of the race long battle for the lead between McNamara/Townsend and Whitney/Shelton. These two swapped the lead several times during the race and as they flew down the final run with their spinnakers it was Whitney/Shelton who held a narrow lead. However, McNamara/Townsend got the advantage at the final gybe/take down and won the race by just three seconds, the slimmest of margins. The Wilsons held a comfortable third in this race.

And what of the Townsends and the battle for fourth place overall? Had their temporary return to shore undone Saturday’s hard work? Had the McKenzies or Lamb/Risbridger taken advantage of their misfortune? Finishing behind the Wilsons in fourth place in this race were Chas and Mandy Hammond from Shoreham SC; fifth place was taken by Mike Weighill and Carl Martin from Swarkestone SC. The Townsends, in turn, had managed to overtake a couple of the boats which had swum in the tide, and they finished ninth. Still, that could be a discard if another race was completed.

However, the sailing conditions were now quite troublesome. Some quite strong squalls were adding to an already formidable wind and the wind-against-tide conditions were creating a lumpy and difficult sea. A number of boats headed for the harbour and the race team abandoned the rest of the day’s racing.

Back at the club the numbers were crunched. McNamara/Townsend with four race wins were the clear victors and took home all the silverware; although they had to work hard for their success. The Wilsons and Whitney/Shelton were on equal points and identical results but the latter were runners up by virtue of having the better result in the last race.

Further back, the Townsends and the McKenzies also shared equal points but this time the tie was broken by the Townsend’s two 4th place results on Saturday. Lamb/Risbridger finished in sixth place overall. The sponsors prizes of a Craftinsure branded towel were won by Michael Dillistone and Andrew Criswick from Castle Cove SC and Nigel and Belinda O’Donnell from Swarkestone SC.

Michael McNamara took the opportunity to thank the organising club for their hospitality and the race team and support crews for the excellent race management in testing conditions.