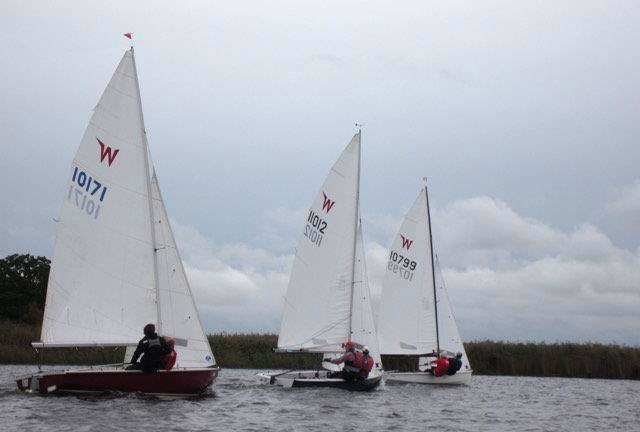 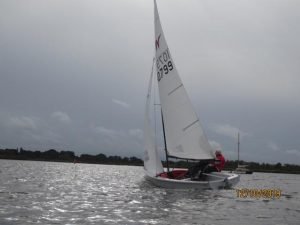 Hickling Broad Sailing Club held their Wayfarer Open on Saturday 12th October on what turned out to be initially a grey damp day with F2-3 winds instead of the forecast F3-4 with no rain. Five Wayfarers competed – four from HBSC and one traveller who had come all the way from Kent to North Norfolk.

The first race started in light rain and from the first beat Peter Dearnley (10799) and Tim Townsend (11012) developed a healthy lead over the other three boats and continued to stretch away over the course of the two lap race. Peter won the first race with Tim second and Tony Lewis (8599) third....read more

The weather improved for the second race with the light rain stopping but unfortunately no increase in the wind strength. Toby Woodcock (10171) showed his years team racing at university had not been wasted by making an excellent start in this race forcing both Peter and Tim head to wind as they tried to squeeze in at the committee boat end of the line where space was not available. In fact Toby nailed all of the race starts but unfortunately lacked the boat speed for the rest of the racing to take advantage of this.

Race three followed a similar pattern to the first two with Peter and Tim stretching away to take first and second again. In the final race Peter was a DNS as his crew had to rush away for another engagement. This led to the closest race of the day with the remaining four boats very close together for the first lap. Tim slowly pulled ahead on the second lap to win by 30 seconds with the other three boats in close order behind.

This is only the second year Hickling have held a Wayfarer Open and attendance was improved on the first year. With nearly 40 boats in the home fleet and positive feedback from those who attended this year the club is hoping for improved attendance in coming years on what are the largest, most scenic and ecologically important sailing waters of the Norfolk Broads.