At the UKWA Cruising Conference in March 2015, John and Kate Mellor showed us the simple tent that they had made for their Wayfarer.

Their design looked functional and a cost-effective way of owning a tent for my Wayfarer, hence I took the plunge and decided to make one for myself.

I purchased 2 Merdina Conquest Fly Sheets Cotton (£19.95 each) via a very well-known online auction site. This is the military version of the Vango Force 10 Mk IV

When the fly sheets arrived, I removed one end from each of them and removed one panel each side from the stern entrance (leaving in the zipped panels).

After fabricating a collar that wraps around the mast (rather similar to my boat cover), I replaced the zip in the forward entrance with one that is open-ended.

I used my wife’s Frister+Rossmann Panda 6 MkII sewing machine (just an ordinary sewing machine). I tried using polyester thread, but did not have a successful outcome, so used C Ne 50 Gütermann 100% cotton.

The next step was to raise my boom which would form the ridge of the tent.

The aft end was supported with a simple crutch made from a couple of 1350 mm lengths of 25 x 45 mm softwood. I hinged the two pieces with a nut, bolt and washers after drilling a hole through each piece of wood at 1250 mm from the end. I shaped the top to fit by offering it up to the boom end and drawing round it with a pencil whilst the feet of the crutch were placed at the end of the groove by the transom. (The shape at the lower end may depend on the Mark of Wayfarer.) 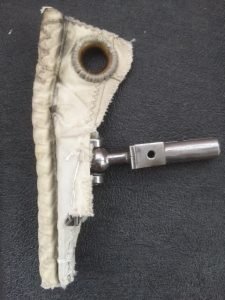 John had used an adjustable gooseneck fitting for the front. He simply used a file to modify it, then clamped in the appropriate place with the thumb screw. I purchased one for more than I care to mention online, but couldn’t see how to modify the one I bought. Not to be outdone, I removed the thumb screw and sewed the gooseneck into the top few inches of a very old sail. This fitted the mast groove and I used the main halyard to adjust the boom height. (Note: Martin Miller W7786 has also designed a temporary gooseneck boom support for a boat tent.)

Raising the boom allowed the two sections of the tent to be draped over it and the mast end secured. At this point you can see how it is going to fit and may need to adjust height. At this point you can mark the material with a pencil ready to cut and join the two halves. Do allow for the seam and do measure again and again if in doubt before cutting. Leave the shroud slits until the next fit.

Joining the two halves was the most frustrating: at some stage, you have to roll one end up and pass it beneath the arm of the sewing machine as you sew. A second pair of hands might have been useful here! I wasn’t happy with the two rows of stitching, so I hand sewed the entire seam using a double polyester thread. It took quite some time.

The lower edge of the tent was to be secured using John’s Velcro looped over string attached to the gunwales. The string I used was 3 mm paracord as it has a little stretch. Whilst John had used P clips to secure the cord to the boat, I used the green tie-downs from the flysheets. There were sufficient tie-downs on the flysheets to make a loop every other screw around the gunwales (see the picture of the transom).

When I next draped the tent over the boom, I was able to mark the shroud slot line and also the line of the gunwales. I took the opportunity to mark where the Velcro fastenings would be attached to the tent as well (avoiding where the cord fasteners were attached). 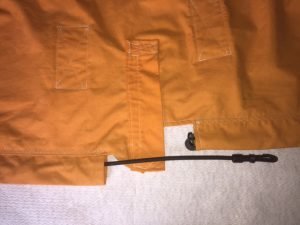 I fashioned the shroud slits in a similar way to my boat cover, but left them a little shorter. Whilst the tent would be secured with Velcro; it needed to be long enough for the rain to run beyond the gunwhales. Bearing this in mind, I cut the lower edge to the shape of the hull and allowed enough length to attach a tube of material (made from spare bits of flysheet). This tube was to house the bungee cord later. I left the rear end until I had finished the rest of the tent. The front section would also have the tube of material whilst below the height of the gunwhale. 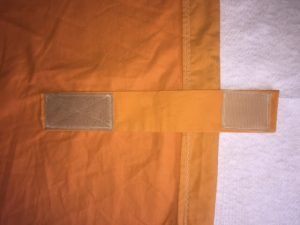 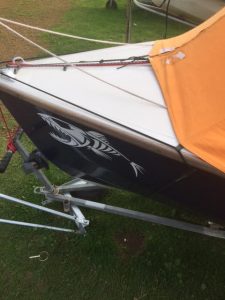 When all bits and pieces were sewn on, the tent was once again draped onto the boat and held in place with the straps. The bungee cord was fitted in the tubes on each side from the shroud to the centre of the transom (hook at each end). Bungee cord (with a hook at each end) was also fitted in the forward tube, extending to the bow fitting.

A small amount of paracord was used to secure the front of the tent. 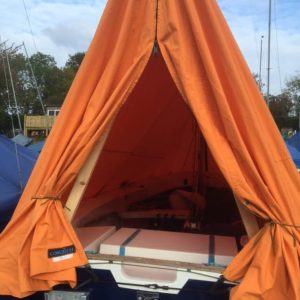 A sneeky look inside

To finish the back end of the tent I removed most of the material from the panel adjacent to the zip and sewed the edges of the gap together (having left sufficient material for a seam). This leaves the back end rather loose (on advice from John as it gives good ventilation).