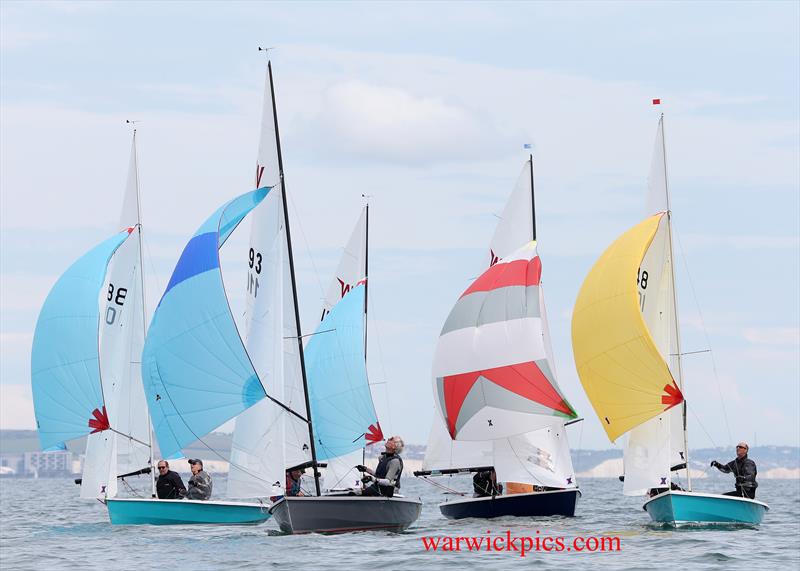 A premium selection of Wayfarers arrived at Shoreham, expecting the usual huge waves. These included Michael McNamara/Simon Townsend and Andrew Wilson, fresh from their tussle at the Westerns at Arun YC. 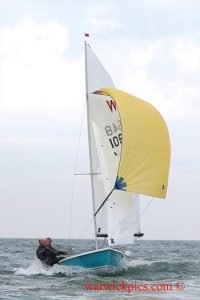 Owing to an unexplained broken toe incident, Andrew’s usual crew, son Tom, was replaced by his brother Martin, on a transfer from the RS400 fleet. Other contenders arrived from Swarkestone, Maldon and Bough Beech, with local Shoreham boys Bill Whitney/John Shelton joining the fray.

Saturday turned out to be a damp squib, with a light easterly, and a humongous 6.6 metre tide, which was bound to upset things. Race officer Megan Pascoe took us well out to sea, and in the first race, McNamara/Townsend hit the front, followed by Whitney/Shelton and the Wilsons, and the order remained until the last reach, when the Shoreham crew attempted a high-scoring windward bag spinnaker launch, which inevitably ended in tears, allowing the Wilsons through to second place.

With the wind dropping and a big shift out to sea, the same trio were seen to be at the front, but on arriving at the first leeward mark, the wind dropped, and a frantic and gripping drift against the tide ensued. The Wilsons maintained their lead, and an impressive drifting performance by Martyn Hare/Steve Perkins from Blackwater SC took them past McNamara to claim second place. The race committee had by that time filled their bucket with sufficient mackerel, so the fleet was towed back into the harbour....read more

With the prospect of four races on Sunday, the crews stocked up on bangers and mash from the elite catering crew, and Ivan kept the bar stocked. You can never have enough carbs.

The diet obviously awakened the Shoreham weather god from his slumber, and Sunday dawned with a brisk north-easterly 4 gusting 5 – that’s more like Wayfarer weather!

In the first race of the day, a good tussle was had up the beat, with the Wilsons rounding first, choosing to wait until there was consensus on hoisting the kite. McNamara started the invidious trend from second place, forcing the rest of the fleet to give it a go – we were racing after all. With the gusts and waves, it was a tough business, but McNamara pulled through, followed by the Wilsons and Whitney/Shelton.

The wind moderated slightly for race four, and the Wilsons hit the front and extended their lead throughout the race, coming in ahead of McNamara/ Townsend, while the Shoreham heavies were trying another unusual high-risk move, involving a spinnaker, the leeward mark, and another boat which may or may not have been on port (or maybe starboard), which let a delighted Dave Roberts/Mike Bryant from Bough Beech through to snag third place at the last minute.

The wind backed to the left, and after the marks had been efficiently moved by the race team, it was away, and again the Wilsons showed impressive speed to stay ahead for the bulk of the race. Could this at last have been Andrew’s chance to beat his nemesis? Well, probably not by going to the wing mark, instead of down the last run, and McNamara lived up to his boat name by poaching the win, and sealing the championship. Third place was a tussle between Roberts and Whitney with the latter stealing the biscuits at the last mark.

Not vintage Shoreham conditions, but the racing was great, and the race committee, helped out by William Warren and Chris Handel, was a well-oiled machine. Not forgetting thanks to the rescue boat crews and onshore trolley dollies, who all added to a successful event.