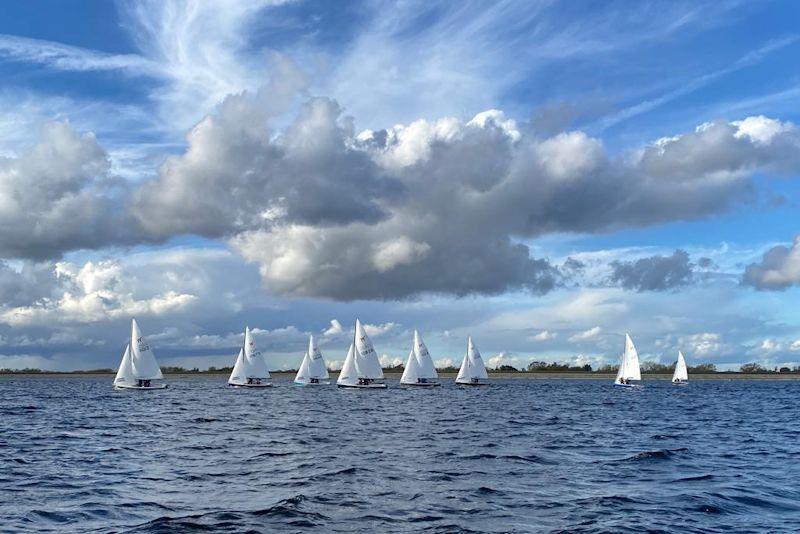 Eventually! After two previous attempts to schedule the Wayfarer Inland Championships 2021, Datchet Water SC finally hosted the event over the weekend of 30/31 October. Five visiting boats joined six from the home fleet. Unfortunately, the rescheduling of the event meant that a couple of the usual travellers and some of the home fleet were unable to attend.

As has so often happened in 2021, the weather forecast was looking challenging. The winds on Saturday were forecast to be gusting around 23mph. The forecast on Sunday was looking more windy still.

The drive to Datchet from Canterbury was challenging in itself. Around the Chertsey turn off on the M25, the rain was biblical and the satnav went back to night mode. However, the weather at the reservoir was relatively balmy. The rain turned to drizzle and eventually stopped altogether. The sun came out to play and the Race Officer, after a bit of gentle arm twisting, decided that running an extra race on Saturday might be prudent, given the forecast for Sunday. ...read more 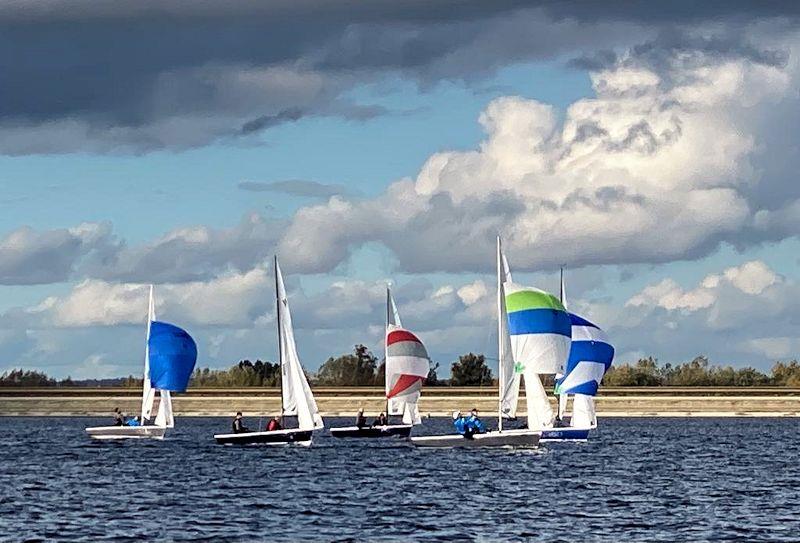 Your correspondent often finds four races back to back quite hard work (walking seems to be difficult the following morning). Nevertheless, the fleet struggled manfully on in what turned out to be lovely sailing conditions, typically 10-15mph, enough to plane on the three sail reaches but not enough for serial capsizes. The results belied the closeness of the racing. Everybody had somebody to race against and the races were rarely processional. At the front, as usual, Michael McNamara and Simon Townsend were having a battle with Andrew Wilson, on this occasion crewed by Sue Rusbridger. Andrew and Sue led on occasions but Michael and Simon were always in front when it counted; at the finish of the race.

A little further back, David Roberts and Mike Bryant, Tim and Jacqueline Townsend, Nigel O’Donnell and Sam Pygall and Paul Hughes and Mark had close racing. Several of these had their moments near the front with Paul and Mark leading the first race for a time and the Townsends very close to the leading pair for a large part of race three. David and Mike had slightly the better day and were in third place overall at the end of the fourth race closely followed by the Townsends.

Saturday evening saw a trip to the Ostrich at Colnbrook for a meal and a few drinks. It was a convivial evening and was followed by a walk (for some) back to the hotel and sleep ready to resume battle the following day. 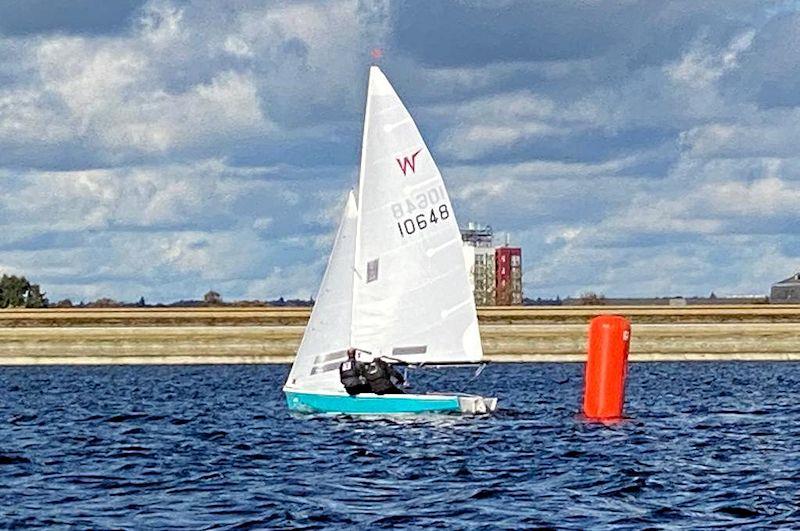 Sunday dawned and it was howling. The rain was very heavy too. We decamped to the clubhouse at Datchet and waited for the race officer to cast his judgement on whether we would sail again. At 0930 his prudent self-came to the fore and he announced that there would there would be no racing on Sunday. From the relative safety of the clubhouse it was easy to see just how windy it had become and during the briefing news came that some of the Wayfarers outside had been blown off their launching trolleys. A rescue party was sent to sort them out.

So the weather disrupted the racing schedule for the Wayfarers yet again (this has become a common state of affairs in 2021 with several racing days lost during the season). However, four good races around a triangle/sausage course were held on Saturday and I doubt the competitors felt shortchanged. The shifts and gusts around the course were enough to keep competitors on their mettle. Michael McNamara and Simon Townsend left Datchet Water SC as the Inland Champions 2021. Andrew and Sue were runners up and David and Mike completed the podium.

In the race to be the Craftinsure UKWA National Circuit and Travellers Series Champions the competition is hotting up. With just the Finale at Bough Beech in mid-November to come, the National Circuit Trophy winner seems fairly buttoned up but any one of several competitors could win the Travellers Trophy this year.

Many thanks to the race team at Datchet for their good management and course setting and to the Datchet Wayfarer fleet for their hospitality. The Wayfarers will be returning to Datchet Water SC next April for the inland Championships 2022. 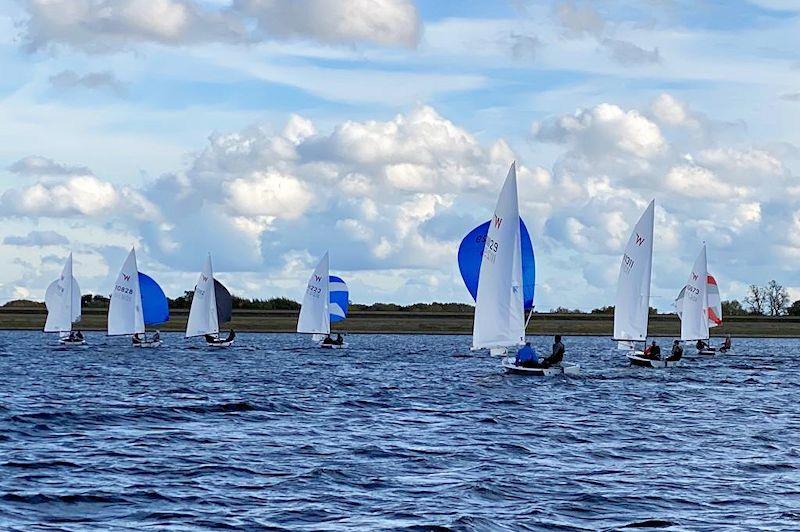 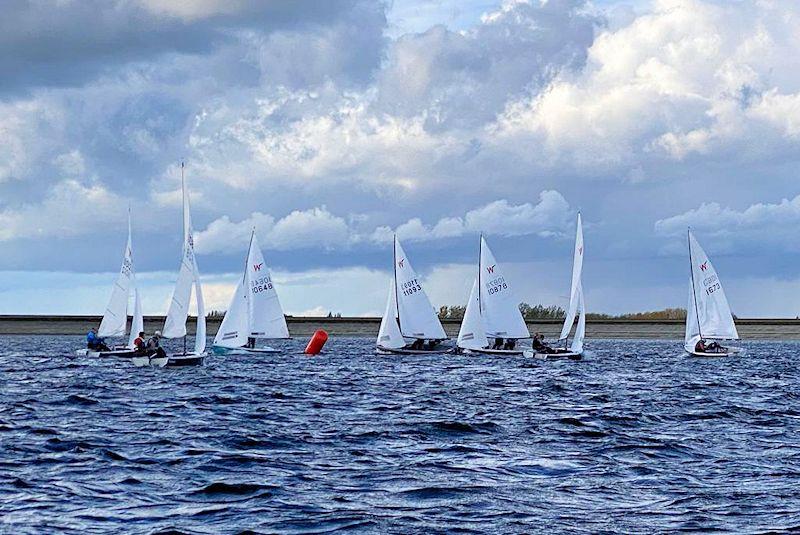