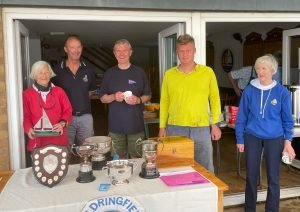 “Come to Waldringfield on the beautiful River Deben where there’s always breeze and there’s more sunshine annually than anywhere else in the UK” we said… and so it was that a select group of competitive visitors joined the strong home fleet for flat calm and overcast and sometimes drizzly weather on Saturday 10th July for the Wayfarer Eastern Area Championships. Quite a contrast to the previous time a few years back where it blew dogs off chains and virtually everyone tested the water.

After a long delay and more cups of tea than the average Wayfarer sailor can cope with, our PRO somewhat reluctantly ventured out in the committee boat to test the conditions. Us locals, seeing the concerned faces of our visitors, said something to the effect of “Don’t worry he won’t take us out in this – he’ll be back soon enough” which was a good way of guaranteeing the postponement flag came down as we were called to the start area towards the Tips. So the only race on Saturday got away at the first time of asking into a fickle fair tide beat followed by some painfully slow reaches and runs back against the tide where you could just about get the spinnaker to set but it certainly paid to sail extra distance to tuck in out of the tide. As it happens it was a good decision to take us racing – a two way tussle for the lead took place between Mike MacNamara and Simon Townsend and Andrew and Tom Wilson with the former eventually prevailing to set the (perhaps predictable) form book for the weekend. That was it as far as sailing on Saturday was concerned, but a good barbecue under the gazebos to avoid the rain, followed by some fine local Adnams kept visitors from pitching their tents until it was probably rather darker than they might have earlier planned....read more

Fortunately Sunday dawned beautiful – wall to wall sunshine was back and some nice clouds bubbling up inland as a sign that the sea breeze was coming. As the morning progressed the sunshine disappeared again but not before a reasonable SE breeze had filled in – maybe 10 knots but shifter than a shifty thing as Waldringfield is famed for.

Races 2 and 3 saw some very difficult beats against the tide to a Pink windward mark in the Galleons area but oh how the wind seemed to head and die as we tacked out from the bank towards the mark in the stronger tide leaving us stranded in the middle….well that’s what it felt like to us, but somehow Mike Mac and Simon seemed to sniggle their way around the mark unhindered in each race and so pull out a decent lead to take 2 more bullets. The beats were very tricky indeed – sometimes (in fact most of the times) it paid nicely to short tack up the Waldringfield shore but then just occasionally (and often enough to tempt some of us) taking a lift out into the adverse tide paid dividends provided the wind gods looked favourably and gave you a nice big header to tack on. Whatever the Wilsons bagged two more seconds but were chased hard by Roger Challis and Mark Johnston in race 2 and Neil Collingridge and Anne Spalding in race 3. The mental torment of playing snakes and ladders was mercifully relieved by the PRO giving us a short break ashore for some lunch before heading out for one final race.

Mike Mac and Simon had wrapped things up nicely by now with 3 firsts and clearly not enough time to get more than race in before the cut off to get us home to watch the football – we should have not bothered of course! But Mike and Simon, as successful as they are, sail for the sheer fun of it and so led off the fleet for a final race around a slightly wonky trapezoid incorporating Waldringfield’s half submerged island. The Deben was wonderfully full, as was the sun which had come back out to play and we didn’t have to do all that tiresome short tacking as by now the tide was on the turn. This time Mike and Simon and Neil and Anne pulled out a good sized lead on the rest of the fleet (some of whom parked up on the aforementioned half submerged island) but try as they might Neil and Anne couldn’t find a way past. Rarely more than a few boat lengths apart and after some hectic gybing antics going into the final leeward, Mike and Simon held on to make it a clean sweep of victories for the weekend. We tried but it wasn’t enough!

So that was that. Tea and prizegiving – Mike and Simon went off with armfuls of excellent silverware which dates right back to the Wayfarer’s early days in the late 50’s. Andrew and Tom Wilson secured second overall and Neil and Anne were third and won the first Waldringfield boat trophy. Matthew Lake and Rachel Parkinson won the prize for first classic Wayfarer and Liz Feibusch and Will Cleverley took home the trophy for first female helm. Mike Mac, who’s funnily enough pretty good at it by now, gave the traditional winners’ “Thank-you” speech to the various people from Waldringfield and the Club who pulled together for another excellent event.

Next up are the Wayfarer Europeans and Nationals at Medway Yacht Club in mid-August. The fleet always gets a cracking welcome at this long-time Wayfarer stronghold and there’s plenty of optimism than numbers of entries will continue to rise as the fleet emerges from its enforced hibernation.